The Industrial Internet of Things (IIoT) shows promise for the generation and use of “big data” in automation, but it is delivering little, as of yet. This is partly because deployment costs are high and the benefits are not clear cut.   It’s also because the concept is not well defined. But importantly, the unique demands of automation are not easily solved with commercial IoT solutions. These include real-time communications, bullet-proof cybersecurity, and the adoption of new and emerging standards, such as TSN, OPC UA and MQTT.

Solutions exist today to deliver the promised IIoT benefits. Better collaboration between vendors is a pre-requisite for the success of IIoT and Industry 4.0, as you’ll read elsewhere in this issue (see story about Hilscher’s efforts with the Open Industry 4.0 Alliance.) But a better understanding all round of automation’s needs will also help.

These can be summarized as:

Below, we take a closer look at the first three needs listed above. In our coming Fall issue, we will discuss the fourth and fifth requirements: leveraging the “cloud” for next-gen automation systems.

The Need for Real-time Networks 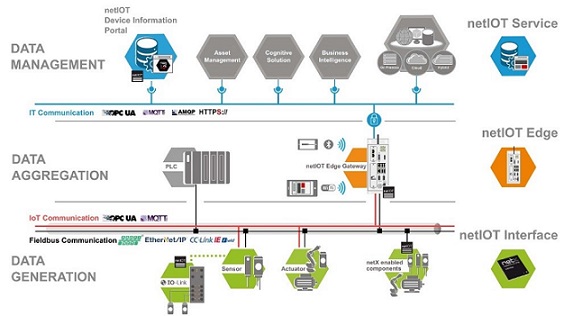 Data communication is the foundation of modern automation. The digital age welcomed in first fieldbus and then Ethernet, bringing device-to-controller and controller-to-controller connectivity. Deterministic – that is, predictable – performance is essential and “real-time” requires additions to the Ethernet specification.  Note the word “additions.” If the nirvana of plant-floor to top-floor communications is to be successfully reached, a real-time solution has to be compatible with raw Ethernet.


Several ways of achieving that have been developed and “Industrial Ethernet” has become one of the driving forces behind modern automation systems. There are several “versions” however, none of which are compatible, and that has led to the same diversification of solutions as with fieldbus.

Users often find themselves “captured” inside a particular communications “universe” as a result.  This is not intrinsically bad since all vendors support product ranges – from field devices to PLCs and DCSs – that deliver excellent results. However, two difficulties result: third parties have to support all universes and end users do not have an “open” field to deal with.

Hilscher realized that the market needed to support all universes equally, so a flexible adapter solution was developed.  The company launched its own family of netX chips that enable a product to be configured for any popular protocol via a simple configuration change. Gateways and adapters like the netTAP and cifX PC card families offer single-solution interfaces capable of serving all protocol universes – whether built into a device by the OEM or implemented in the field by the SI or end user.

The openness and transparency of cloud-based systems bring big security risks. Various approaches can be used to protect against malicious attack.  IEC 62443 defines a set of criteria to which systems can be designed. Hilscher’s netX 90 and netX 4000 chips support IEC 62443 strategies by providing a range of mechanisms for protecting data integrity.  For instance, the chip architecture is divided between the network-facing parts and the slave-facing segments. These are logically isolated, separating the communications functions from the application tasks. Should a cyber-intrusion occur, this isolation limits the effect of malicious attack.


Cryptography based on FIPS 140-2 is used to support authentication and verification. Hardware-accelerated cryptography is employed in the netX chip to significantly improve I/O cycle times by reducing CPU load and memory footprint. Software upgrades cannot match the performance of this hardware-accelerated solution.

Since it’s unlikely that the various communication universes will ever merge into a “single protocol solution”, perhaps a way of synchronizing data transfers might help.  That’s the underlying premise of Time-Sensitive Networking (TSN).

TSN is vendor neutral. It’s a set of IEEE 802 Ethernet sub-standards intended for Real-Time Ethernet architectures. TSN achieves determinism by using time synchronization and a schedule that is shared among network components. By defining queues based on time, TSN guarantees strict latency (i.e. delay) through switched networks. The promise for TSN users is a common Physical layer, with the various fieldbus protocols becoming Application layer issues. The full TSN specification is still emerging.  Hilscher’s latest netX chips are already compliant with the most recent TSN releases and are ready to adopt the full specification once it is finalized.

Two standards that have been around for a couple of decades are becoming important for IIoT: OPC UA and MQTT. OPC UA with its clever information model concept (and now with TSN included - OPC UA TSN), promises network transparency literally from plant floor to cloud. And not just for raw data but also for “information” – i.e. data that carries meaning.  MQTT, a “light” messaging protocol, will also be important in this context, though probably linked with middleware products that can add the semantics needed by higher level systems. Hilscher netX chips support both OPC UA and MQTT.

The future of automation will be profoundly different, but the changes will be evolutionary rather than revolutionary. We’ve highlighted here the importance of real-time communications, bullet-proof cybersecurity, and the adoption of new and emerging standards, such as TSN, OPC UA and MQTT.


In the Fall issue of netXConnect e-newsletter, we will look at cloud-based technologies and their ability to deliver “big data” benefits to industrial automation.