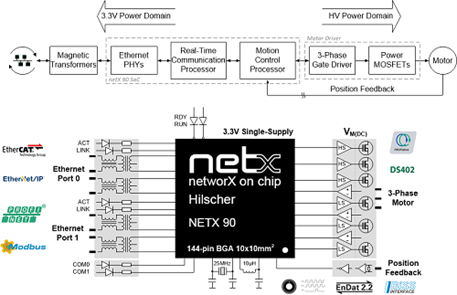 Hilscher has entered the Motion Control market space with a single chip solution that allows popular real-time Ethernet networks to be easily deployed in motor control applications. The solution, designated netMOTION, is based on Hilscher's netX 90 system-on-a-chip (SoC), which combines two Arm® Cortex®-M4 microcontrollers in a single 144-pin BGA package measuring just 10mm x 10mm in footprint. This tiny package is ideal for demanding applications where network, drive and motor begin to merge with one another in a limited space. A Starter Kit based on standard Hilscher development tools is available, including sample code and application examples.

netMOTION effectively turns Real-Time Ethernet into a Motion Control solution. It is believed to be the only microcontroller on the market worldwide having motion control functions integrated with real-time Ethernet communications that cover the breadth and depth of the variety of network protocol standards.

netX 90 is part of Hilscher's netX family of communications processors, designed to interface automation equipment to any one of 19 different real-time industrial networking protocols. The chosen protocol is deployed by loading firmware, enabling one product design to be used in multiple markets.

netX 90 is the most sophisticated member of the netX range in that it can support applications in addition to networking.  It is a system-on-a-chip (SoC), which means it can be utilised in many different scenarios.

By combining Hilscher's expertise in real-time communications with the applications potential of the chip, Hilscher has been able to integrate two separate worlds into one with netMOTION.  Among the benefits of a single chip solution are lower latency, higher efficiency, improved synchronization, and lower cycle times. Lower material costs also result, and designs can be brought to market much faster.

Target applications for netMOTION at the moment are systems or machines where centralized motion automation is needed, such as pumps, fans and compressors, valve islands, small actuators and encoders, and servo motors with a network interface. On the network side, Hilscher`s communications firmware offerings are motion-ready, supporting features such as CIP Sync for EtherNet/IP, EtherCAT, CoE for CANOpen DS402, SoE for SERCOS, and PROFINET RT/IRT for PROFIdrive.

The netX 90 chip incorporate two Arm® Cortex®-M4 processor cores (see diagram above), one dedicated to network communications, the other to applications.  The two “halves” are isolated so attacks over the network cannot reach the application. The network protocol is defined by loadable firmware, with 19 different protocols supported, meaning that one product design can meet many market and industry needs.

Each half of the chip has its own peripheral connections. On the left are the real-time communications (PHY is integrated too) while on the right is a series of software-defined interfaces for various motion control applications.   The diagram below illustrates how these interfaces might typically be used in motor control applications.

Nico Mäding, Department Manager, netX SoC/ASIC Design, says: "Put simply, netMOTION is a flexible, software-defined system approach that uses generic hardware. We support everything through our growing netX ecosystem and since we are using a Cortex®-M4 based microcontroller architecture, our customers also benefit from the established Arm® ecosystem." 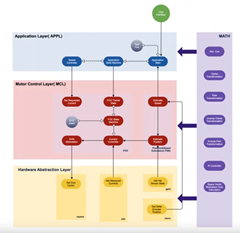 The netMOTION Development Kit provided by Hilscher includes a software development board and reference code to quickly design a speed-controlled closed loop application, synchronized over the Real-Time Ethernet.

The demo example (see left) has been shown - working in the lab with a real motor - to have a FOC runtime performance of 28 microseconds.

Mäding believes that netMOTION can bring new benefits to a well-established market-place.  "If multi-protocol support is required, companies today often fall back on a two-chip solution," he says.   "We would like to change that with netMOTION and at the same time enable higher efficiency along with a lower BOM."   He believes the small form factor can have a big impact because the market is increasingly looking for more compact solutions. He sees the multi-protocol benefits of netX 90 being particularly important because it means that one product design can serve many different market sectors and geographies.

"However," he adds, "our netX 90 can also be used as a co-processor in combination with customer-specific processor solutions, to cover an even wider market."

Visit the netMOTION Knowledge Base

Learn about the netMOTION Starter Kit